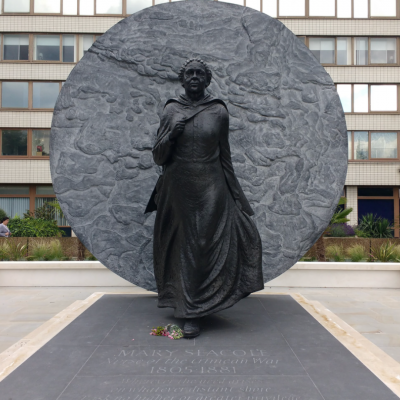 A statue of Mary Seacole, unveiled in 2016 in front of St. Thomas’ Hospital, London, in honor of her role in founding the modern profession of nursing.

Titus Kaphar, a contemporary American artist, confronts history by dislodging entrenched narratives as past to understand their impact on the present. His 2013 8-by-8-inch collage of magazine cutouts, “Nourishing a Nation,” which you can view here, did this for me.

In the collage’s center, a Black woman holds a baby up to her cheek in what appears to be a plantation in the Antebellum South. A mountain of men cascade beneath her as if from the cornucopia of her care.

“Who is she?” I used to ask my doctoral students when we looked at the collage in the university art gallery. Over the years I did this, it never took less than half an hour for one of them to say, “A nurse.”

The societal stereotype of a nurse does not often include Black women. But this does not match reality. The profession was founded by one as much as it was founded by Florence Nightingale.

Born a free person in Jamaica two years before Nightingale, Mary Seacole learned traditional healing practices from her mother. By the time of her young adulthood, her reputation as a healer grew in Jamaica, Cuba, Haiti, the Bahamas, and Panama, where, in 1850, she traveled to care for people during a cholera outbreak.

Three years later, she went to Crimea and asked to work with Nightingale in the British field hospitals where, the entrenched narrative tells us, Nightingale began the modern profession of nursing during that bloody war. Seacole was not allowed in. She was, after all, a Black woman.

Undeterred, she started her own field hospital, but closer to the front lines than Nightingale’s. After the war, The Times’s war correspondent, Sir William Howard Russell, wrote of her: “I trust that England will not forget one who nursed her sick, who sought out her wounded to aid and succour them, and who performed the last offices for some of her illustrious dead.” His words stand at the base of the first public statue of a Black woman in the United Kingdom. It was unveiled in 2016 in front of St. Thomas’ Hospital, London, in honor of her role in founding the modern profession of nursing.

We want to achieve health equity in the United States. It is a common and worthy goal. It is my hope that, this Black History Month, we dislodge entrenched narratives about the profession of nursing by recognizing the contributions of the Black Americans who once nursed — and nurse today — the sick, the potentially sick, and the dying.

With these narratives, we stand more of a chance of achieving this goal.