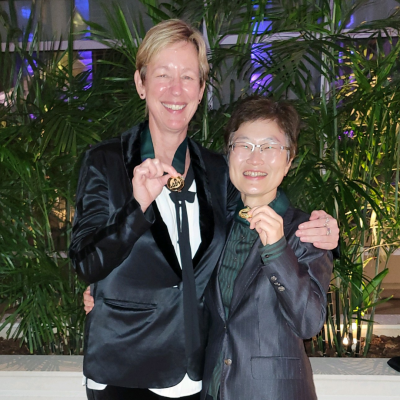 Professors Miriam Bender, left, and Jung-Ah Lee are fellows in the American Academy of Nursing. Fellowship in the academy is a major milestone in one’s nursing career.

Associate Professors Miriam Bender and Jung-Ah Lee have been inducted into the 2021 class of fellows in the American Academy of Nursing (AAN).

Fellows are selected from a pool of hundreds of applicants and are chosen for their contributions to nursing and advancing public health.

“Professors Bender and Lee are exceptional nursing leaders and visionaries. It’s an honor to work alongside them,” Founding dean and Distinguished Professor Adey Nyamathi says.

“This is a remarkable milestone in their careers.”

A leader in nursing philosophy

Bender is the director of the Center for Nursing Philosophy, the only academic unit for philosophical scholarship in the United States.

The center is connected to the larger international nursing philosophy community, which seeks to support philosophical inquiry into nursing and healthcare practice, theory, research, education, and policy.

She currently serves as acting co editor-in-chief of the Journal Nursing Philosophy along with Stefanos Mantzoukas, associate professor in the Department of Nursing at the University of Ioannina (Greece).

Bender is also leading a nationally-funded $1.3 million study that examines the implementation and effectiveness of the clinical nurse leader model in improving patient safety and care quality.

Lee was recently named a fellow in the Gerontological Society of America and the American Academy of Nursing. She is also president-elect of the Asian American and Pacific Islander National Association.

One of her current studies is a $3.6 million National Institutes of Health (NIH)/National Institute on Aging (NIA) research project to implement a home-based, culturally and language specific caregiving intervention for underserved dementia family caregivers.

Lee has also collaborated with UCI Health Geriatric Medicine to enhance Age Friendly Health Care System and Community through support from Geriatric Workforce Enhancement Program (GWEP) of DHHS/Health Resources and Services Administration on a $3.7 million. Lee was named as Fellow of Gerontological Society of America. She is dedicated to the improvement of well-being and health for the vulnerable older adults and their family caregivers.

Bender and Lee will join five other nursing faculty in the academy:

Fellowship in the academy is one of the highest honors a nurse can achieve.

The academy states that the recognition comes with a responsibility for fellows “to contribute their time and energies to the Academy, and to engage with other health leaders outside the Academy in transforming America’s health system by:

Learn more about the American Academy of Nursing ›