Rowland Chinedu: A mission to change healthcare from inside out 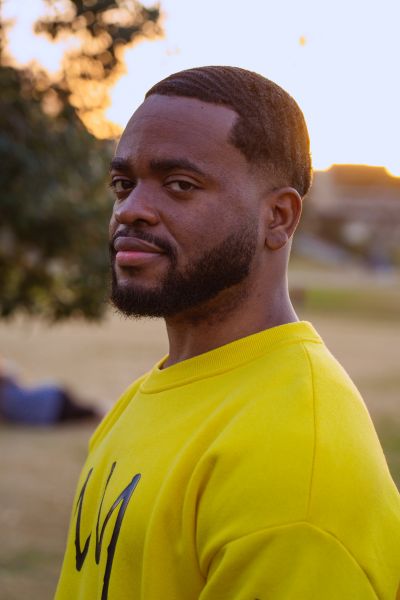 Nursing student Rowland Chinedu has a mission: To change systemic racism in healthcare from the inside out.

He will be well on his way when he graduates from the UCI Sue & Bill Gross School of Nursing next month.

After he passes his licensing exams, Chinedu hopes to begin his nursing career in a surgical or cardiac intensive care unit (ICU).

Why? “You need at least two to three years in an ICU to study to be a nurse anesthetist.”

Chinedu wants to work in pain management so he can confront the racism that African Americans frequently experience in the healthcare system.

“Serena Williams had her postpartum scare because her complaints weren’t taken seriously,” referring to when the tennis star had a near-fatal pulmonary embolism after delivering her daughter in 2017.

“It’s not financial. It’s not social status. She’s a well-known athlete and was not taken seriously,” Chinedu says. “It’s a systemic issue.”

Racist and false beliefs about African Americans that have perpetuated and persisted — that they have thicker skin and higher pain tolerance — are another reason he wants to enter healthcare. Their pain complaints are often minimized or dismissed.

“If I’m on this side, they will be taken seriously.”

Chinedu says pain management is a quality of life issue. “If you’re in pain, you’re sad and all you can think about is the pain. You can’t move past that pain to healing.”

There also simply need to be more Black people in healthcare, he says.

“I looked around and realized there are not enough people that look like me in the field, So, I’ll step into it and see if I can advocate for people who look like me.”

Chinedu came to the United States from Nigeria six years ago to live with family in San Jacinto, Riverside County.

He excelled in high school. By the end of his junior year, his counselors were encouraging him to apply to the University of California and California State University systems.

Chinedu’s parents instilled in him a strong work ethic and motivated him to be a strong leader, in Nigerian tradition. They were hoping he would become a doctor.

“But every time I looked into my future, I was reluctant to pursue that career,” noting that it is a long educational path and a long career. “Is that something I want for myself?”

A teacher prompted him to volunteer at a local hospital to explore his options. He wound up working mostly with the nurses and received a front-row seat to what they contribute to a patient’s health and well-being.

Chinedu was struck by what he saw.

“Yes, the doctors make the orders, they treat the disease, they tell you what’s going on with the patient,” he says.

“But at the end of the day, it comes down to the nurse. It’s the nurse that’s coordinating the care between the doctor and the rest of the team. The nurse is the quarterback for the patient’s health,” something Assistant Clinical Professor Michael Bueno told him.

More than anything else he witnessed at the hospital, it’s that memory that sticks out the most. “That’s why I pursued nursing.”

A determination to go to UCI

But Chinedu did not want to go just anywhere. His sights were set on UCI because of the nursing school’s approach to teaching.

“They don’t teach you to be a regular worker, it’s more about leadership skills and taking initiative instead of just following.”

Although he was rejected after his first application, it didn’t stop him.

“It’s not worth me not doing what I want to do,” he says, so he went to community college for two years, tried again and was accepted.

Chinedu was not able to transfer all of his community college units. To make them up, he had to take a public health and biochemistry course in summer school at UCI.

Every Monday, Wednesday and Friday he commuted from his Riverside County home to Irvine in the middle of rush hour traffic. He spent two hours driving most days.

Financial support at the right time

Toward the end of that summer, he was becoming worried about his finances despite receiving financial aid and working three jobs. Gas, food, rent and meals on campus were draining him.

UCI encouraged him to apply for the Elizabeth C. Tierney Scholarship for some relief. His acceptance came at the perfect time. Citing his honors and awards, leadership and volunteer activities, academic performance, an essay and financial need, Chinedu received $3,000 — $2,000 from the Tierney Scholarship and an additional $1,000 match from UCI Financial Aid. “It came when I needed it the most.”

“Having that extra $2,000 made me able to manage everything. It really, really made an impact for me.”

He is confident and excited about his future, which is coming up fast.

“Right now, I’m calm, because I believe that whatever is meant for me, I’m going to get it.”