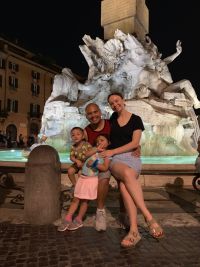 Assistant Clinical Professor Michael Bueno on vacation in Rome with his family.

Whatever he does, assistant clinical professor Michael Bueno, MSN, RN, CNL, has always enjoyed doing it as part of a team.

In high school, he was a member of the cheer team and played sports. Cheerleading was especially physically demanding.

His tumbling days are far behind and he jokes that if he attempted it now, “I would break my neck.”

Nursing’s team orientation is partly what drew Bueno into the profession.

“Now, instead of basket tosses, we do bed lifts.”

He also had some nudging from mom, a nurse practitioner. She wanted him to go to medical school and follow in the footsteps of his father, a pediatrician, and his sister, a breast surgeon.

“At first I didn’t want to do that and majored in computer science. Then the dot com bubble burst [in 2000].”

Bueno decided to pursue nursing and never looked back.

A passion for teaching

When he started his nursing career, he quickly discovered a passion for teaching the next generation of nurses.

As a student himself, he often found that experienced nurses were reluctant to take on students and educate them.

“That stuck with me for a while. I decided I wouldn’t make students feel that way.”

He started volunteering to take on students and lead them. The more he did, the more he loved it. Plus, there are greater benefits to helping students.

“I see them as an extra set of arms rather than a hindrance. And someday, they may be taking care of me or a family member.”

Bueno went on to earn his master’s in nursing education. He particularly enjoys technology and simulations. The nursing school is planning a high-tech, state-of-the-art simulation center in its new building, slated to open in fall 2022.

“My whole career, I have loved education. That’s my perfect place.”

In his spare time, Bueno enjoys video games. His daughter, 6, is getting into it, too.

He looks forward to resuming international travel with the whole family, including his wife and son, 4. “My wife and I are really getting into travel now that the kids are a good age.” The whole family has been to Rome, and Paris is up next when it’s safe to travel again.

Bueno is also pursuing his PhD, which he plans to complete within the next couple of years. “Then maybe I’ll head to the Maldives.”