Report: UCI nursing’s bachelor program is one of nation’s best 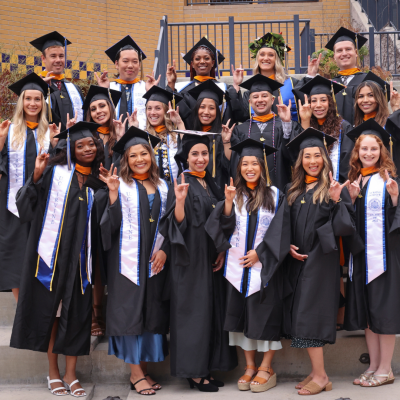 The bachelor of science in nursing science program at the UCI Sue & Bill Gross School of Nursing is one of the best in the country, ranking 39th by U.S. News & World Report.

The program prepares aspiring nurses to serve in homes and hospitals, in communities and clinics, in agencies and industry, then advance into the highest echelons of their profession as leaders and scientists.

Launched in 2007 to meet a need in Orange County for a nursing program that emphasizes science, it remains the county’s only such program and one of just four in the state.

As bedside nurses, our graduates care for the sick, the potentially sick, the dying, and they tend to the environment in which that care happens — including in the community.

Through the unique BSNS program, students are rigorously trained in research, the science of quality improvement and leadership.

Each student authors an original paper for publication and graduates with a Lean Six Sigma Yellow Belt Certification, preparing them to create change in their units in pursuit of the safest, highest quality patient care.

UCI holds on to high rankings

The university overall has been ranked eighth among the nation’s public universities — and 34th overall, an improvement of two spots — on the 2022-23 list of “Best Colleges,” released today. This is the eighth consecutive year in which UCI has placed in the top 10.

In addition, UCI ranked No. 7 overall in the subcategory of social mobility, which takes into account the graduation rate of students awarded Pell Grants.

“I am delighted that U.S. News & World Report has once again recognized UCI’s overall excellence by including us in its listing of the top 10 public universities in the nation,” said Chancellor Howard Gillman. “This ranking is testament to the hard work and dedication of our extraordinary faculty, outstanding staff and talented students.”

In other areas, UCI has again been rated the country’s 15th-best college for veterans. The U.S. News & World Report also evaluated certain other undergraduate programs. UCI came in 24th for computer science, 30th for business, and 42nd for engineering.

These results come on the heels of UCI being ranked ninth in the nation among public universities on Forbes’ 2022 list of “America’s Top Colleges.”

Earlier this year, UCI was No. 9 in Money.com’s 2022 survey of “Best Colleges,” making it the highest-rated California university.

In other higher education ratings, in 2019, both Money and Forbes put UCI first in the country among public universities for “best value” – a school’s ability to deliver the biggest bang for the tuition buck based on costs, academic quality, postgrad earnings, student debt and graduation success. And in the 2019 Wall Street Journal/Times Higher Education ranking of the nation’s universities, UCI placed first for offering an inclusive, supportive learning environment.

And twice in a row, for its commitment to upward mobility, UCI has topped The New York Times’ College Access Index of U.S. universities “doing the most for the American dream.”

This is the second year the publication has shared the rankings of undergraduate programs in certain disciplines. Rankings are based on the judgments of deans and senior faculty members of U.S. nursing schools and departments. For this year’s rankings, faculty and deans at 681 insitutions were surveyed.