Research by Alison Holman finds negative mental, physical outcomes possible even if you weren’t there 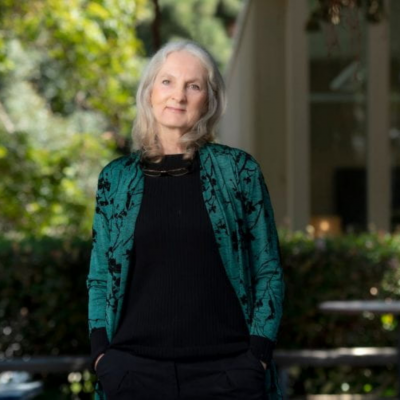 “The healthcare profession has grown to understand that people’s mental health responses to acute stressors are linked to physical health – particularly cardiovascular ailments – down the road. My research has also identified the role that media can play in perpetuating long-term symptomology,” says E. Alison Holman, Ph.D., UCI professor of nursing. Steve Zylius / UCI

For 30 years, E. Alison Holman, PhD, UCI professor of nursing, has focused her research on collective trauma stemming from such climate-related disasters as wildfires and hurricanes, global events like the pandemic and wars, and other human-caused tragedies such as terrorist attacks, mass shootings and bombings.

“I’ve always been interested in large-scale events,” she says.

“As healthcare professionals, we need to understand how people’s mental health responses impact their physical health in the moment and long-term.”

“Collective trauma” refers to an event that is shared by an entire community, not just an individual. Media – both traditional and social – has expanded community borders beyond a specific geographic location to encompass anyone anywhere in the world who consumes coverage of the crisis.

“The role that media plays in the link between mental and physical health following collective trauma is a critical part of my work,” Holman says.

Her understanding of that is personal as well as professional. The 9/11 terrorist attacks on the U.S. occurred while she was in Nigeria with her family, including two young children.

News of this reverberated around the world, and during the six days they waited to return to the States, they experienced the event through media coverage. “I wasn’t there; I didn’t know anyone who was there. And yet it affected me personally, wondering what our country was in for and what it meant for my kids,” Holman says.

Back in the U.S., she was a co-principal investigator on the UCI research team that conducted a large, nationally representative study funded by the National Science Foundation on how early reactions to 9/11 (e.g., psychological responses and media exposure) affected participants’ mental and physical health for three years following the attacks.

Says Holman: “Because it was such a big event, people were watching it over and over and over, and that was linked to a lot of distress and health problems over time. We realized that we needed to find a way to prevent overconsumption of media.”

Her research into the 2013 Boston Marathon bombings revealed, surprisingly, that media exposure was a more powerful predictor of acute stress symptoms than being at the site of the blasts.

“We found that people who were watching hours and hours of media coverage were more distressed soon after the attack than those who had actually experienced the event in person,” she says.

“This was a very unusual discovery then.”

After the 2016 Pulse nightclub shooting in Orlando, Florida, Holman was involved in a follow-up survey of participants from the Boston Marathon study, which identified the cumulative effects of repeated exposure.

“We encourage people to limit the amount of exposure they have to traditional and social media after these collective events.”

Over the last 20 years, the healthcare profession has increasingly recognized the link between mental health responses to acute stressors and long-term physical health effects.

“When faced with a traumatized patient, it’s really important that we understand how their trauma may have affected them both mentally and physically. That awareness, particularly with marginalized and underserved populations that generally experience higher rates of trauma, is going to help us be more compassionate and provide more effective care,” Holman says.

“We also need to reflect on our own biases and think about how they may impact our interactions with traumatized patients and, hence, their well-being. We need to learn how to overcome our biases and to support each other as we learn how to change our behavior. None of this is easy, but it’s critical for building a more equitable and effective healthcare system.”

If you want to learn more about supporting this or other activities at UCI, please visit the Brilliant Future website at https://brilliantfuture.uci.edu. Publicly launched on Oct. 4, 2019, the Brilliant Future campaign aims to raise awareness and support for UCI. By engaging 75,000 alumni and garnering $2 billion in philanthropic investment, UCI seeks to reach new heights of excellence in student success, health and wellness, research and more. The Sue & Bill Gross School of Nursing plays a vital role in the success of the campaign. Learn more by visiting https://brilliantfuture.uci.edu/sue-and-bill-gross-school-of-nursing.