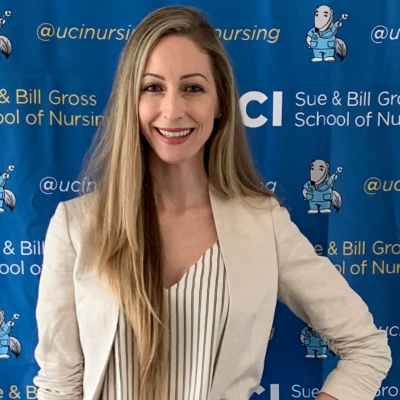 If Marcela Dos Santos were to give advice to her past self, it would be this: Take care of yourself first.

As a future nurse practitioner, Santos aims to bolster the importance of mental health along with physical wellness to provide truly comprehensive care to her patients. She hopes to break down stigmas around mental health, which is an area that Santos feels is neglected, especially within minority communities. She hopes to address mental health not only with patients, but among nurses as well.

“Especially for nurses. You’ll burn out if you don’t take care of what’s going on inside,” she says.

“It’s going to start showing externally in how you treat your patients, in your care, in your job. I feel like [mental health] is very important to include in your own care.”

Santos is a first-generation college student. She is the children of South American immigrants – her mother is from Colombia and her father is from Brazil. Santos is grateful to have her family’s cultures instilled in her, especially through language. She speaks both Spanish and Portuguese.

Growing up as a witness to her parents’ work ethic and resilience inspired her to pursue her goals. However, with this willing attitude, Santos also finds a coexisting stigma around mental health.

Santos did not see herself as a nurse practitioner at the beginning of her journey in higher education. Originally, she wanted to become a clinical psychologist. After experiencing anxiety and depression herself in high school, she felt called to work with bullied adolescents.

Following this calling, Santos pursued an undergraduate degree in psychology, transferring to UCI from Irvine Valley College and graduating in 2012. In 2014, Santos began the doctorate program in physical therapy at Loma Linda University, which she enjoyed for its combined mind, body and soul approach to healing.

However, a few classes into her program, Santos realized that physical therapy was not the right fit for her.

Transitioning to a nursing career

In 2017, Santos decided to make the transition into nursing. She came back to UCI as a part of the inaugural Master’s Entry Program in Nursing (MEPN), which had just launched that year.

The MEPN program is designed for students who want to pursue a master’s degree in nursing while holding a non-nursing bachelor’s degree. She graduated from this program with her master’s in nursing in 2020.

This was not the end of her UCI journey. Today, Santos is pursuing her third degree from UCI through the Doctor of Nursing Practice-Family Nurse Practitioner (DNP-FNP) program. She plans to graduate in 2023 with her DNP.

Heal the body, heal the mind

After graduating, she hopes to work as an aesthetic nurse while incorporating mindfulness and mental health into the world of healthcare. Santos is particularly interested in regenerative medicine, which focuses on enhancing the body’s healing abilities rather than making cosmetic changes.

Though it is a field not traditionally taught in medical schools, Santos found interest in aesthetics after conducting research in her undergrad years with Dr. Brian Wong, a UCI professor of otolaryngology who specializes in facial plastic and reconstructive surgery.

“With aesthetics, no matter how much you augment the external appearance, whatever you have going on inside is still going to reflect on the outside,” Santos says.

“Our thoughts can manifest into illness and healing the mind can also heal the body. Beauty comes from within.”

About the University of California, Irvine: Founded in 1965, UCI is the youngest member of the prestigious Association of American Universities and is ranked among the nation’s top 10 public universities by U.S. News & World Report. The campus has produced five Nobel laureates and is known for its academic achievement, premier research, innovation and anteater mascot. Led by Chancellor Howard Gillman, UCI has more than 36,000 students and offers 224 degree programs. It’s located in one of the world’s safest and most economically vibrant communities and is Orange County’s largest employer, contributing $7 billion annually to the local economy and $8 billion statewide. For more on UCI, visit www.uci.edu.

About UCI’s Brilliant Future campaign: Publicly launched on October 4, 2019, the Brilliant Future campaign aims to raise awareness and support for UCI. By engaging 75,000 alumni and garnering $2 billion in philanthropic investment, UCI seeks to reach new heights of excellence in student success, health and wellness, research and more. The Sue & Bill Gross School of Nursing plays a vital role in the success of the campaign. Learn more by visiting https://brilliantfuture.uci.edu/sue-and-bill-gross-school-of-nursing.