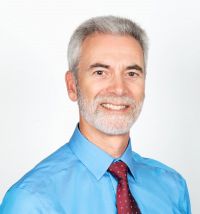 Burnout among healthcare workers is an epidemic.

At any given time, more than 50% of physicians and 33% of hospital-based nurses experience its symptoms, according to a 2018 narrative review published by the National Institutes of Health.

Dr. Gideon Strich was one of those physicians.

For almost 30 years, he worked as a diagnostic and interventional radiologist at a level 2 trauma center. The position demanded long hours and high performance.

“During my career I had four or five episodes of burnout where I had to drag myself to work for 3-6 months and wasn’t looking forward to it,” he remembers. “Which, for me, was really unusual. For the majority of my career, I loved what I did.”

“Burnout is caused by chronic stress with no way to relieve it and get any rest to recuperate,” says Strich. “A weekend off or a week of vacation isn’t enough.”

The condition can also be a spiral of emotional exhaustion, feeling as though there is no end. Burnout is not the same as depression, but many burned out healthcare professional are also depressed.

It is a sad and little-known fact that about 400 physicians die by suicide every year.

Nurses have not been as widely studied, but it has been found that hospital-based nurses suffer from burnout at the same rate as physicians. The rate of nurse suicide is double that of the general population.

Dr. Strich nearly became one of those statistics during his last episode of burnout. At 59, he and his partners sold their private radiology practice to a corporation.

On top of that, he was going through a difficult divorce.

Feeling depressed, he saw a physician and went on medication that helped a little, but it didn’t stop his decline.

“Over two or three months, I started this cycle of feeling like I was going down the drain. Every day I was more depressed. I was finding it difficult to concentrate and focus on the complex cases I had to interpret.”

“As things got worse, I couldn’t see any way out of the situation and the pain. I even thought about taking my own life.”

Fortunately, he shared his feelings with a friend from the hospital and she took him to a hospital with a specialized program. It took six months of partial inpatient therapy for him to recover.

He admits that his experience is hard for him to talk about. But he knows that sharing it will help others and erase some of the stigma around burnout in the healthcare setting.

Becoming a coach to help others

After his recovery, he researched his experience and what could have caused it.

“I discovered this thing called burnout that everyone knew about except me. Of course, since then there have been so many articles and programs about the problem of physician burnout that almost everybody knows about it.”

Through his research, he learned that coaching is one of the best ways to prevent or overcome burnout.

So, he decided to become a coach himself. He also wrote a book — Burnout RX — to help other healthcare professionals going through the same thing. In September, he’ll lead two virtual webinars for physicians and nurses at UCI Health and in the community.

A failure of leadership

A lot of burnout is related to the ever-increasing demands on our time, says Dr. Strich.

“Physicians and nurses are working longer hours. Their patients are sicker and not doing as well.”

One of the primary causes of burnout is poor leadership and workers feeling as though they have no sense of control of their environment.

In fact, the majority of factors that cause burnout are out of one’s control, says Strich. He encourages his clients to focus on the things they can control like relieving stress through mindfulness and developing a positive mindset through journaling.

“Conflict for nurses is one of the major drivers of burnout,” Strich says. “Working on teambuilding with other members of the clinical team is very important.”

Most importantly, he guides them back to finding the meaning in their work.

“One of the problems that people have after they’ve been in a career for a while is they lose track of why they originally wanted to do it.”

The consequences of burnout

Strich wants to help others recognize and overcome their burnout before the consequences become as drastic as they did for him.

Burnout often begins in medical school, so Strich volunteers his time to coach medical students. According to a 2016 study, 69% of medical students have burnout. The consequences of this include:

Fear of being seen as weak

Part of the healthcare burnout problem, says Strich, is cultural. Physicians and nurses learn the unwritten rule during training that expressing feelings of burnout or exhaustion or asking for help may be seen as weak. It may even be penalized.

Strich feels that it’s critical to address burnout head-on. It carries a number of risks that go far beyond one’s personal sphere. Burnout in the healthcare setting can lead to:

Burnout also leads to such lower productivity that according to one Mayo Clinic study, the lost productivity equates to eliminating seven medical school graduating classes.  A recent article in Annals of Internal Medicine put the cost of physician burnout to the healthcare system at $4.2 billion annually.

How to help yourself

If getting to a coach is not possible, Strich recommends a few things that will help in the interim:

“Anyone in a people-facing job is at risk for burnout: physicians, nurses, other healthcare professionals,” says Strich. “Burnout is not abnormal. It’s the new normal.”

Register for Burnout: We’re all in this together

Join us for a free, interactive webinar on combatting and preventing burnout. Spaces are limited, so register today ›