Danisha Jenkins: ‘I have to be where the hurting is’ 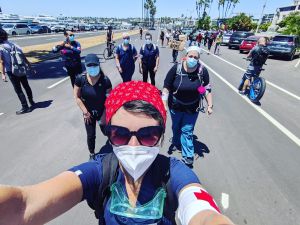 Danisha Jenkins and her fellow nurses at a protest.

She was moved by the story of Barton, the founder of the American Red Cross. Barton was known as the Angel of the Battlefield during the Civil War for fearlessly tending to Union and Confederate soldiers alike. She treated their wounds, reassured them and helped them write letters to their families back home.

“I thought she was such a badass. She was strong and brave and smart,” Jenkins remembers.

Going into the community

It’s no coincidence that Jenkins, a PhD candidate at the UCI Sue & Bill Gross School of Nursing, displays the same bravery and fearless dedication that Barton did all those years ago. 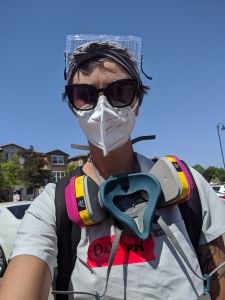 When nationwide protests began after the death of George Floyd in Minneapolis, Jenkins and 200 other nurses from all over San Diego county began traveling to most protests in the area to provide supplies and care to injured protesters.

“We have a nurse presence at every major protest. Sometimes there are 10 different ones on a single day. We try to be at all of them,” she says.

At one protest, Jenkins and the protesters were in a moment of prayer when police began spraying tear gas and shooting rubber bullets at the group. She was uninjured. But all of the nurses have a riot bag with a gas mask and other supplies just in case.

The incident was a timely one: Her doctoral dissertation happens to examine the interactions between law enforcement and nurses.

“That’s become a really critical conversation right now. This dynamic is coming to light in other arenas, where it was typically hidden by the walls of the hospital,” she says.

Nurses frequently care for patients who are in the custody of, or being searched for by law enforcement, she notes. This includes, particularly in San Diego, patients in border patrol and ICE custody.

“Nurses must navigate very different philosophies and power structures surrounding these patients in order to provide care,” she says. 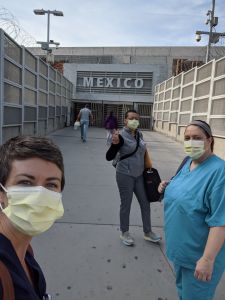 In her role as director of Critical Care and Emergency Services at a nonprofit hospital in San Diego, she and her fellow nurses travel to Tijuana seven days a week. There, they perform side by side care with the nurses and provide education about critical care and COVID-19 symptoms at a local hospital.

Border towns are disproportionately affected by the coronavirus pandemic because of the hundreds of thousands of people who pass through the border every day. As a result, the spread of the disease is significantly higher than it is in the general population.

“Border towns are their own countries when it comes to this disease,” Jenkins says.

The relationship and collaboration with Tijuana nurses has been so successful and fruitful that it will continue after the pandemic.

“We’ve learned that nurses are so good at breaking down walls and barriers. This pandemic has empowered nurses to break them down in the face of fear.”

‘We can do more than we think’

In addition to a busy job, writing her dissertation and attending protests, Jenkins is also married and the mother of three children, ages 4, 7 and 11.

“The pandemic taught us that we can do more than we think we can,” she says.

Despite the demands, she is wholly dedicated to being where she is needed most.

“Your job is dictated by the need. My motto is that I have to be where the hurting is. You have to be malleable.”

‘Nursing is a political act’

Another benefit of the pandemic as Jenkins sees it is that nurses are finding their political voices and stepping out from the confines of the hospital walls and going into the community.

“Nursing is a political act. It’s pushing up against power structures that harm your community and patients,” she says.

“There’s a great dismantling happening. Nurses have an opportunity now to build up a healthcare structure that has equitable good outcomes.”