ASSIST: A win-win for seniors and students 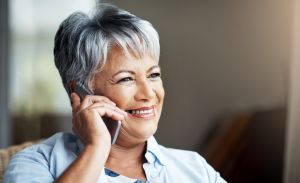 When nursing student Melanie Tram started her community health class and was asked to choose a population she wanted to serve, she chose geriatrics.

“I’ve always had an attraction toward that population. There’s so much we can learn from them.”

When the UCI Division of Geriatric Medicine and Gerontology, in partnership with the UCI Sue & Bill Gross School of Nursing, started the Assisting and Supporting Socially Isolated Seniors Through Telephoning (ASSIST), she jumped at the chance.

“I thought it would be a great opportunity to meet someone and learn about them,” Tram says. “Most of the interactions I’ve had with seniors have been so meaningful.”

Checking in on socially isolated seniors

The program was started in March as a way to support and check in with seniors who are socially isolated as a result of the COVID-19 state shutdown. Both medical students and nursing students participate.

When the ASSIST team needed someone LGBTQ-friendly to pair with an LGBTQ senior, they approached graduating nursing student Kevin Nolasco. He accepted, called by an inner responsibility to give back to that population.

“I have a ton of respect for the older gay population because they were there,” he says. “The HIV crisis, the protests. They paved the way for a lot of us who are navigating that dynamic.”

The participating seniors drive the conversation, as well as the frequency and length of the calls.  The calls can be daily or weekly, and they can be as short as 10 minutes or as long as an hour.

Every call starts off with a check on the senior’s welfare to address any immediate needs. The students will point them toward resources if necessary.

Tram’s senior, a man in his 60s, is a talkative person who just wants to share what’s on his mind — his past career aspirations, his hometown and childhood. “Most of the time, I feel myself just actively listening and asking him questions.”

Graduating and moving on

During their last conversation, they talked about Tram’s career aspirations and where she would go next. She graduated on June 13.

Nolasco, who also graduated on June 13, found the experience rewarding.

“I wasn’t entirely sure how our relationship would go. But he’s this lovely older gentleman. He’s super adorable.”

Now that Tram and Nolasco are preparing for their licensing exams, they must move on. Their seniors will pair up with new students.

The program will continue as long as both students and seniors sign up to be paired.

To participate in ASSIST, please contact Professor Jung-Ah Lee at jungahl@uci.edu. All students are fluent in English, and others can also speak Spanish, Vietnamese, Korean or Mandarin Chinese.