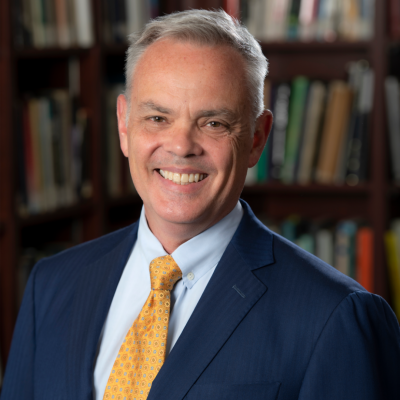 Mark Lazenby is a professor of nursing and the dean of the UCI Sue & Bill Gross School of Nursing. A California native, Lazenby began his lifelong pursuit of positive social transformation in southern California, working as a community organizer with underserved youth in East Los Angeles. He brings with him a belief that the profession of nursing is a powerful driver of social transformation, particularly for health equity and planetary justice.

As an international expert on psychosocial-spiritual cancer care, Mark has studied the spiritual support of cancer patients from minority religious backgrounds and the implementation of emotional distress screening in routine cancer care, research funded by the American Cancer Society and the National Cancer Institute. He is on the editorial boards of Palliative and Supportive Care, BMC Palliative and Supportive Care, and Cancer Nursing, and he is a co-editor of two books on psychosocial-spiritual care. He has served on expert panels and as review coordinator for numerous proceedings for the National Academy of Medicine and on study sections for the European Research Council. He is a past president and fellow of the American Psychosocial Oncology Society and a fellow of the American Academy of Nursing.

Prior to joining UCI, Dean Lazenby was professor of nursing and philosophy and served as the associate dean for faculty and student affairs at the University of Connecticut School of Nursing from 2019 to 2022. He was instrumental in expanding the nursing school’s faculty by a third; instituting a faculty development program; establishing the school’s office of diversity, equity, and inclusion; expanding the school’s enrollment management to include holistic admissions and student success; and bringing global nursing into the classroom during the pandemic through a virtual simulation project with 5 nursing schools from around the world. From 2010 to 2019, he was on the Yale School of Nursing faculty with joint appointments at the Yale Cancer Center, the Yale Divinity School, and the Whitney and Betty MacMillan Center for International and Area Studies.

Dean Lazenby earned his PhD (2001) in the philosophy of religion from Boston University, working under the renowned Wittgenstein scholar Burton Dreben. After his doctoral studies, he was a philosophy professor at Gwynedd-Mercy College in Philadelphia (2001-2006). During this time, he witnessed how nurses cared for his dying parents, and taking to heart Wittgenstein’s dictum that philosophers should work with their hands, he decided to become an advanced practice cancer nurse, which he did at Yale (MSN, 2009). The following year, he was a Fulbright Scholar at the King Hussein Cancer Center in Amman, Jordan, studying the spiritual well-being of cancer patients.