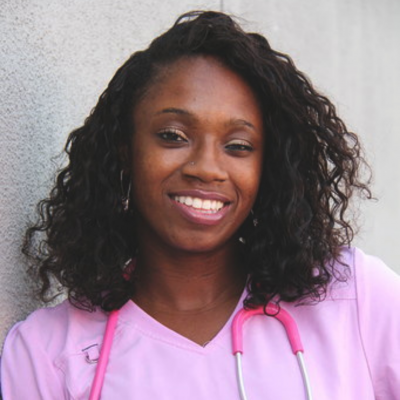 In her high school anatomy class, Alex Jones-Patten couldn’t get enough information about the cardiovascular system.

Little did the Portland, Oregon, native know then that she would be embarking on a career as a cardiac nurse by trade and a future nurse scientist as a PhD student at the UCI Sue & Bill Gross School of Nursing.

“I absolutely love learning about all the different heart abnormalities, specifically in adults and how they tie back to management of the self, such as diet, exercise and stress management.”

Jones-Patten is particularly interested in risk reduction for heart disease and the preventive power of healthy habits and the barriers to education about them.

“If we knew how much power we had to prevent or at least reduce the risk of some of these cardiovascular diseases, how much simpler life would be,” she says.

Reaching those with preventable heart problems

While working in several cardiac units throughout Orange County, Jones-Patten noticed something interesting about the patients: Most of them were not “true” cardiology patients with heart rhythm problems or valve issues.

Instead, they were patients with short-term diagnoses such as high blood pressure or elevated heart rates related to something else happening in the body.

“That’s just what the heart does: It’s very, very sensitive to stress and to other organs sort of breaking down,” Jones-Patten says.

But educating patients about what was happening was not easy.

“Teaching cardiovascular care, specifically to Black and brown communities, is really challenging from the bedside.”

To do it, she realized she would have to get in front of the problem.

In her work with Project Roomkey, a state program established during the pandemic to provide homeless individuals shelter in local hotels, Jones-Patten saw a high prevalence of behaviors that increase heart disease risk: drug and alcohol use, smoking, poor nutrition and high levels of stress.

“Not being able to control their diabetes, smoking, trying recreational drugs. All of these things lead to increased risk of high blood pressure and stroke, and they just don’t know,” Jones-Patten points out.

“They don’t know any better or there’s something else going on where they are engaging in that behavior because something else is really troubling them.”

The link between discrimination and smoking cessation

One of those high-risk behaviors, smoking, is the focus of her doctoral dissertation. Specifically, she will examine the link between discrimination — real or perceived — and readiness to quit smoking in African Americans who are homeless.

“Not only do they smoke, but they’ve got a history of diabetes, high blood pressure, anxiety, depression, or they’ve had various surgeries.”

In her conversations with homeless individuals, many of them report feeling discriminated against and talked down to when seeking medical care, which further harms their mental well-being. Then there is structural racism, psychosocial stressors such as job insecurity, insults linked to social status or race and financial strain.

All of these can contribute to the desire to smoke, she says, and affect one’s willingness to quit.

“I wanted to research a population that would be accessible and that would also benefit from whatever it ended up looking like,” she says.

Jones-Patten will be benefiting a large group: In 2019, African Americans made up 58.2% of the population on Skid Row despite being 6% of California’s population. National surveys show that approximately 70% of homeless people smoke, more than five times the rate of the general population.

Jones-Patten, who is being advised by Associate Professor Sanghuyk Shin, believes that  understanding these barriers will influence readiness to quit smoking among African Americans and ultimately aid in closing the health equity gap in the population.

She is equally committed to the success of her diverse PhD student peers, who she supports in her role as the school’s Diverse Educational and Community Doctoral Experiences (DECADE) representative. Last academic year, she was honored with the Outstanding DECADE Representative Award for her work.

After she earns her PhD, Jones-Patten wants to continue her focus on racial and ethnic minority communities because she sees vast room for growth on the research side.

“We can better understand the barriers to disease management and disease prevention,” she says. “I think there’s still some gaps there that we need to have more conversations about so that we are seeing reduced numbers across the board.”

Ultimately, Jones-Patten wants to break down the barriers to education about cardiovascular health and risk management and reach the people who need the information most.

“How do we make this better where we are all but eradicating cardiovascular disease? I’m really interested in that. I get really excited.”