Transforming health of homeless through peers 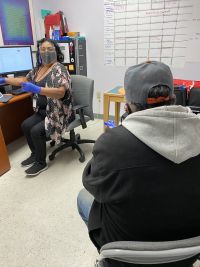 While working as an instructor in the School of Nursing at Case Western Reserve University in Cleveland, Adey Nyamathi took her students to visit a new mom who had just been discharged after giving birth to her first baby.

However, they were shocked to see how ill equipped the new mom was upon arriving home.

“She had no refrigerator. She was basically homeless. She had a roof over her head, but not much more,” she remembers.

“And we’re expecting these moms to be able to raise a child when they don’t have the basic necessities?”

What she saw that day launched a research career that has spanned three decades and changed countless lives.

Working with homeless on Skid Row

Nyamathi, founding dean and distinguished professor at the UCI Sue & Bill Gross School of Nursing, had been visiting Skid Row at least weekly to lead a team of research staff to promote the health of the homeless population there. The area in downtown Los Angeles spans 54 blocks. More than 4,700 people live there as of 2019.

There, Nyamathi and her team have an office at the Union Rescue Mission, one of the largest and oldest missions in the country.

For over a decade, Nyamathi has been testing the efficacy of a nurse-led community healthcare worker model to promote efficiency of various intervention studies. 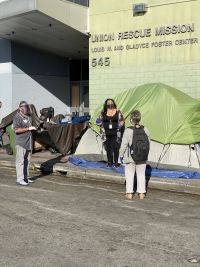 Through this model, men and women who had been homeless themselves are recruited and trained to be members of the research staff as community health workers (CHWs). Similar to any employee, they are paid and are led by nurse supervisors.

CHWs have enormous power to effect change, since they have been homeless themselves and have walked in the shoes of the population we are serving.

During one drug treatment study, Nyamathi’s team recruited men who were previously incarcerated. They worked with nurses to deliver an intervention for men just coming out of jails and prisons.

“It was exceptional. They became part of a team, doing everything a research staff member does,” she remembers.

Their lives changed, too.

“With the salaries they saved, they were upgrading their housing, getting married. One of them had a baby. It was an incredible journey.”

Many of the homeless people Nyamathi works with suffer from a variety of chronic illnesses and infectious diseases, such as HIV, hepatitis and tuberculosis.

In fact, Nyamathi and her team just completed a study about treatment adherence for latent tuberculosis. Latent TB means that one has been exposed to tuberculosis but does not have active disease. Activ TB can be spread through talking and coughing.

“What I discovered is that the county did not really focus on people with latent TB because it is not transmissible,” she says.

The data, however, showed that the majority of people who develop an active TB infection had latent TB that was never treated.

“People who are homeless have so many insults to their body and their immune systems are not very strong,” says Nyamathi. “They’re the ones most likely to get active TB.” 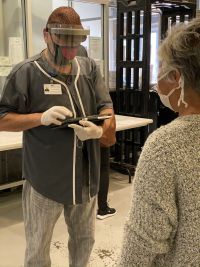 Nyamathi and her team wanted to see if they could improve adherence to latent TB treatment among persons experiencing homelessness using a nurse-led CHW model.

The team hired and trained such formerly homeless people, who are currently stable and living in rent-subsidized facilities. Further, having a dedicated nurse who has a passion to do this work is another critical component.”

In the latest latent TB study, the CHW help to enroll participants, walk with the clients to get their chest X-ray, administer questionnaires and provide the medication under the nurse’s guidance. Monthly, the CHWs bring the participants in to the clinic for a checkup.

The results have been stunning. In a previous study conducted by the county in which CHWs were not part of the treatment plan, completion of treatment was 65%. Nyamathi’s study reached a 92% treatment completion rate. In addition, drug use decreased.

“It was the CHWs who went into the streets, enrolled our participants, and educated them about the importance of taking their medication.”

Funding for a hepatitis C study

Nyamathi’s and her team recently received funding for a similar study on Hepatitis C Virus (HCV) treatment adherence. The treatment is more rigorous than the one for latent TB, and consists of eight weeks of daily medication.

“We brought in the community to help us design the study. It included persons experiencing homelessness, as well as nurses, physicians and community healthcare workers out there in Skid Row. They told us how to make our program culturally sensitive as well as barriers to completing treatment.”

Nyamathi believes in involving the community when it comes to making decisions about the lives of others.

“This is a framework for me. I don’t make assumptions about what people need; I ask them.”

Moving out of homelessness — and staying out

CHWs are valuable for another reason: Through encouragement and support they can help their community move out of homelessness.

The reality is, though, that homelessness fluctuates.

“People go in and out of homelessness all the time. The big drivers are drug use and mental health issues,” says Nyamathi. That often precipitates a downward spiral in which one loses their family and their job.

The key, she says, is getting the right resources to people in need. Stable housing is the first step. Then, it’s getting them into treatment, whether it’s for drugs, mental health or both.

Mental health services in the homeless community are especially critical, says Nyamathi. “A lot of these people have long histories of trauma.”

Most of all, she cautions against believing that homelessness can’t happen to you.

“I have met nurses, physicians, people with college degrees, who are homeless.”