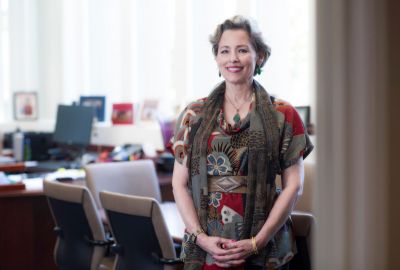 UCI Sue & Bill Gross School of Nursing Founding Dean and Distinguished Professor Adey Nyamathi and three other nursing faculty are among the top 2% of scientists in the world.

In total, UCI has 445 of the world’s best researchers in the list released by Stanford University.

Nyamathi has been researching homelessness and working directly with the homeless community for more than three decades.

Her efforts have been focused on disease eradication, preventive strategies, education and treatment adherence among the homeless population on Skid Row in downtown Los Angeles.

Nyamathi’s work in India has changed the lives of mothers with AIDS by connecting them with others like them so they have more support. She has been published more than 200 peer-reviewed publications and has impacted thousands of lives through her work.

The rankings were developed by Stanford University based on number of publications and citations by other scientists. More than 7 million scientists who have been published since the 20th century were analyzed, including those who have passed away, to create the list of nearly 159,683 researchers.

Other UCI Henry and Susan Samueli College of Health Sciences faculty and nursing school collaborators ranked among the world’s top 2% researchers include: