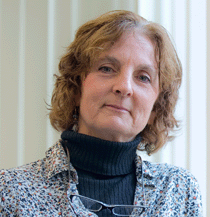 UCI Sue & Bill Gross School of Nursing Professor Alison Holman, PhD, APRN, FNP, and colleagues recently published a paper in Science Advances, a peer-reviewed, multidisciplinary, open-access journal of the American Association for the Advancement of Science. Dr. Holman and her team conducted a longitudinal study of more than 4,000 U.S. residents over a three-year period following the 2013 Boston Marathon bombings and the 2016 massacre at the Pulse nightclub in Orlando, Florida. Participants were surveyed four times, enabling the team to capture responses to both events and examine the associations between responses to the first incident and reactions to news coverage of the second.

The results are published in the paper “Media Exposure to Mass Violence Can Fuel Cycle of Distress” in the 17 April 2019 Issue of Science Advances. Dr. Holman and her colleagues found that bombing-related media exposure predicted post-traumatic stress symptoms (PTS) six months later. In addition, PTS predicted worry about future negative events two years after the bombings, which in turn predicted increased media consumption and acute stress following the Pulse nightclub massacre one year later. Their conclusion was that trauma-related media exposure perpetuates a cycle of high distress and media use.

“The takeaway message of our findings is that media exposure to coverage of major community traumas may set up a cycle of distress that may be harmful for the public’s mental health and well-being,” says Dr. Holman. “Clinicians and policy-makers need to understand the impact media can have and encourage the public to limit their exposure after these events.”