‘It feels different having my DNP’ 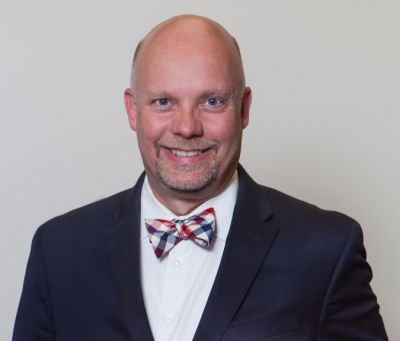 Since graduating from the UCI Sue & Bill Gross School of Nursing Doctor of Nursing Practice — Post-Master’s Program in 2021, Pat Patton sees an evolution in himself.

DNP in hand, he says, “I felt a change. I don’t know if others could see it, but I could see it within myself.”

Patton, the chief nursing executive at UC San Francisco Health, has a well-established and well-earned reputation as a health system leader and change-maker.

Why would someone at a high level pursue another degree? “I did it because I didn’t know what I didn’t know.”

He is grateful that he did.

“It feels different having my degree as a DNP than it did with my MSN,” Patton says.

“Maybe it’s because of the knowledge I gained with social determinants of health, public policy, national policy, quality improvement or looking at things in a different way.”

Championing the evidence behind nursing practice

When it comes to the relationship between nursing research and practice to improve the quality and safety of patient care, “I pay much more attention to the evidence now.”

And if the evidence doesn’t exist, Patton says, his nurses are encouraged to create the evidence through nursing research. Three nurse PhDs from the UCSF School of Nursing work part time with staff nurses to gain approval for their studies and begin doing research.

As a DNP, Patton’s role is getting that research translated into evidence-based nursing care.

“As soon as we find the evidence that something works, we’re going to immediately put it into practice,” he says.

“You don’t have to wait an average of 17 years between publishing the research and implementation for something to get into practice.”

Proactively pushing for evidence and research is something Patton doesn’t think he would have done prior to his DNP.

And it is critical to him that nurses add their voices to the body of evidence in healthcare.

“If we don’t add our voice and add our knowledge and our power to do research, and what we can prove to what we can do under the scope of our licenses, then we’re failing our profession,” he says.

The social determinants of health

Patton says he is also much more attuned to the social determinants of health, the economic and social conditions that influence the health of an individual or a community.

He credits Associate Professor Candace Burton with expanding his understanding via her social determinants of health course.

In particular, Patton saw how those determinants impact the health of various communities, especially the transgender community.

“Because of her, and because I understood the plight, the issues and the problems that the transgender population have, I can better advocate for them at UCSF.”

While he was a student, he worked with the transgender clinic leadership at UCI to build support for increasing funding for the UCI Health Gender Diversity Program. Doing so enables individuals to remain in Orange County rather than traveling to UCLA for care.

At UCSF, Patton is advocating for nurses and nurse leaders to work with GLIDE, a homeless nonprofit in San Francisco. This will better educate faculty and staff leaders on social determinants among the homeless and veteran populations.

His hope is that what they see and learn will lead to greater understanding of the multifaceted issues that impact the health of the homeless population, then let that inform how they provide care for it.

“The homeless population was a way to continue the work of understanding the social determinants of health and look at things a little bit differently.”

How technology can lead to better care

The role of technology in healthcare is stressed in the DNP Program.

Armed with that knowledge, Patton sees a big opportunity.

One of his major projects is weaving the social determinants of health into the hospital’s electronic medical records system.

Once implemented, staff nurses would be alerted to an individual patient’s determinants via a pop-up, whether it’s that they lack access to a car, live in a food desert or live alone.

“When the nurse sees a pop-up informing them about their patient, that nurse will take different actions when discharging a homeless patient vs. what they were doing before.”

Counsel and perspective sought from peers

Patton is proud to have his knowledge sought by UC system leaders who have asked for his feedback on polices that will affect the UC Health Systems so they can advocate for nurses at the state and national level.

“That made me feel I was using my degree to the fullest. I didn’t realize I was coming across that way. But I think it was because of what I learned in the DNP program around policy and legislation that really helped me look at things.”

In turn, Patton looks at his fellow DNPs much differently.

“I tell them, ‘You got your DNP, so I know what I can hold you accountable for. I know what you learned, so now let’s work on x, y and z.’”