A commitment to service 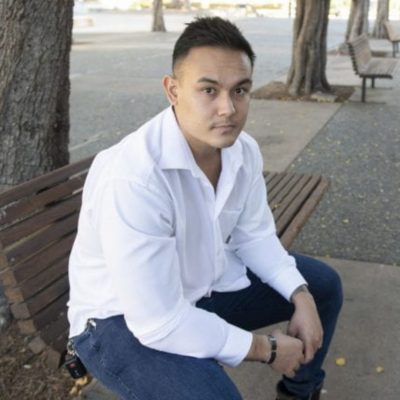 “I have a passion for helping people, and I see the nursing field as a great way to do so,” says Teylor Cohen. Steve Zylius / UCI

Teylor Cohen enlisted in the U.S. Marine Corps on his 18th birthday, just months before he started UCI in the summer of 2013. A biology major and first-generation college student, he took a hiatus from his studies to serve his country.

“Since I was a young boy, I had always dreamed about becoming a United States Marine,” Cohen says. “I knew I was going to join the Marine Corps, and nobody was going to change my mind.”

While serving in the Marine Corps for five years, he completed three deployments overseas as an infantry squad leader. His first deployment took Cohen to Spain, Serbia and Ghana, followed by a second deployment in Okinawa, Japan, and on a ship on the South China Sea. His final deployment brought him back to Okinawa and the South China Sea, plus Singapore.

‘A passion for helping people’

Cohen came back to UCI in the winter of 2019 and changed his major to nursing science the following year. He will graduate with a B.S. in the spring.

“I was always interested in something that had to do with healthcare,” says Cohen, who was a hospice volunteer during high school in his hometown of Fountain Valley, and, more recently, a senior caregiver. “I have a passion for helping people, and I see the nursing field as a great way to do so.”

Cohen is one of the nearly 100 student veterans at UCI. The university’s Veteran Services Center, a division of Student Affairs, assists them in transitioning to college, helps manage their GI Bill benefits, and celebrates veteran culture through events on Memorial Day and Veterans Day.

This quarter, Cohen and his fellow nursing students are in clinical rotations for pediatrics, at CHOC Children’s Hospital, and labor and delivery, at UCI Medical Center.

“This award has alleviated some of the financial stress that we have encountered and has allowed me to focus more of my time on my family and on my school work.” he says. “I cannot express how blessed I feel to have received this award and I am forever thankful for this generosity.”

This fall, Cohen is also the recipient of a Elizabeth C. Tierney Nursing Scholarship and the Nursing Leadership Award. The honor goes to UCI nursing students based on leadership, honors, academic performance and financial need.

In addition to his academic pursuits, Cohen is a foster father to two of his fiancé’s young cousins.

“Supporting a family and being in nursing school full time is stressful,” he says. “People don’t realize how demanding it is to be a foster parent.”

In the future, Cohen hopes to become an emergency department or intensive care unit nurse.

“The foundations I have built here at UCI will help me accomplish this,” he says.

“I believe that working in the medical field is extremely meaningful and that it will benefit everyone and help make this world a better place.”

About the University of California, Irvine: Founded in 1965, UCI is the youngest member of the prestigious Association of American Universities and is ranked among the nation’s top 10 public universities by U.S. News & World Report. The campus has produced three Nobel laureates and is known for its academic achievement, premier research, innovation and anteater mascot. Led by Chancellor Howard Gillman, UCI has more than 36,000 students and offers 224 degree programs. It’s located in one of the world’s safest and most economically vibrant communities and is Orange County’s largest employer, contributing $7 billion annually to the local economy and $8 billion statewide. For more on UCI, visit www.uci.edu