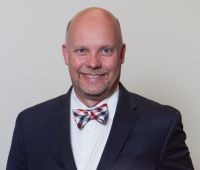 Pat Patton was at nursing school at Florida A&M University one day when the dean entered his class.

She began talking about how getting a bachelor of nursing science (BSN) was the first step, but certainly not the last in our nursing career.

This June, the former UCI Health chief nursing officer (CNO) graduates from the UCI Sue & Bill Gross School of Nursing with the highest professional degree a nurse can possess: the doctor of nursing practice (DNP).

He earned his DNP while working full-time as the system chief nursing executive (CNE) at UC San Francisco.

‘I never planned to be nurse’

In fact, Patton enrolled at Purdue University in his hometown of Lafayette, Ind., before he hit a roadblock: “Somebody forgot to tell me it costs a lot of money to go to college.”

He enlisted in the Army, something his father and grandfather did before him. The plan was to serve four years, then enroll in college on the Montgomery GI Bill, which would pay his tuition.

Patton hoped to be a vet tech for the Army’s horses and dogs. There were no positions, however, so he took the next best thing: combat medic.

“I thought I’ll get some type of healthcare experience and take care of people instead of dogs and cats.”

While stationed in Fort Jackson, S.C., he worked in the emergency department starting IVs, giving over the counter medicine, inserting Foley catheters and suturing wounds. His commanding officer noticed his talent.

One day she approached him and said, “You’re going to be a nurse.”

She persuaded him with a Green to Gold Scholarship, which would cover his nursing school tuition, books and fees. He enrolled at Florida A&M, where his path crossed with the dean’s that day in class.

After graduation, he received an honorable discharge from the army and began his career in a pediatric intensive care unit (ICU). After a brief stint in divinity school in hopes of being a parish nurse — “It wasn’t for me” — he went back to the hospital and worked his way up to house supervisor, coordinating nursing staff.

Aiming for the top nursing role

One day Patton approached the chief nursing officer — his boss — and said he wanted to be one, too.

“What I said was ‘I want your job’ and she said, ‘Great. Let’s get you there.’ She wasn’t afraid, she wasn’t threatened,” he remembers.

Patton joined a number of committees to learn about hospital leadership, what the hospital did and anything else involving its operation.

“As chief nurse, you have to know different things, not just nursing.”

Two years later, his CNO offered him a position at one of their hospitals in eastern Kentucky. He would be CNO and chief operating officer (COO).

But the chief human resources officer, a mentor of Patton’s,  had some news for Patton: That would be as far as he would go without a master’s degree.

Patton protested. “I said, ‘What are you talking about? I’m doing just fine.’”

The chief human resources officer agreed, but told him he’d never get promoted to a bigger hospital or be able to do anything different at his level without an advanced degree.

Igniting a passion for nursing leadership

Patton took the advice from his mentor and received his master’s in nursing administration from University of Kentucky. His passion for nursing leadership ignited there.

After a few years, he set his sights on becoming a health system chief nursing executive.  He was able to to get a system job with his current employer as the vice president for nursing operations.

As he progressed in this role, it was still not the system CNE job he was aiming for in his career. He was then recruited by UCI Health as chief nursing officer in 2016.

The day before Founding Dean Adey Nyamathi started her position, the two had a meeting.

As they strategized a unique relationship between UCI Health and the school, Nyamathi suggested Patton consider enrolling in the inaugural doctor of nursing practice (DNP) cohort at UCI.

He had also worked with Clinical Professors Susan Tiso and Susanne Phillips, as well as Assistant Professor Candace Burton. He also liked the curriculum, so he applied and was accepted.

“Is it stress and anxiety? Absolutely. Is it on top of my 60-70 hour workweek as a CNE? Absolutely. But I have learned more than I can tell you and it’s been a great journey.”

Coming up: travel, family and reading

Soon, Patton will have a bit more free time.

His spouse of 17 years, Kirk, plans to take him to the Strait of Gibraltar in Spain to travel around and go to wineries in search of a great Rioja. Spending more time with the rest of the family will also be a priority: They have four adult children, two grandsons and a dog, Addy.

Patton also enjoys reading about history, something that has been put by the wayside for the last couple of years. “I’m looking forward to reading something other than a nursing journal.”

A commitment to his nurses

Now that he has reached nursing’s pinnacle, what’s next?

Patton wants to continue working to improve patient outcomes so San Francisco Bay Area residents can get the best care possible. He believes that supporting the nurses he leads is the way to do that.

“Patients remember their nurses when they leave. We remember our doctors sometimes, but those nurses are there 24/7 and they make a difference.”