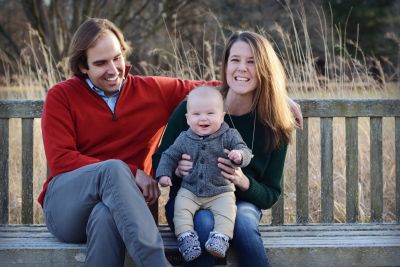 UCI School of Nursing DNP student Ashley Plummer with her husband and new baby. As part of her DNP project, she is addressing the chlamydia epidemic in her community.

While working with adolescents at a women’s health clinic, Ashley Plummer, WHNP, realized that she could help solve a problem: the chlamydia epidemic.

In Denver, where she lives, more than one in 100 residents had the sexually transmitted infection in 2018, according to Denver Public Health. It’s the most common STI in the city.

“When we were trying to figure out how to lower the rates, we noticed that our clinic wasn’t ensuring that partners were being treated.”

Plummer is a member of the first class in the Doctor of Nursing Practice (DNP) Program. She’s taking on the chlamydia epidemic as part of her final DNP quality improvement project, which will illustrate her ability to translate research into practice.

She is the first student in the DNP program to present her project to nursing leadership and faculty.

Chlamydia is a silent infection that produces no symptoms. Left untreated, it can lead to female infertility. When one person in a couple has it, both partners must get treatment or risk re-infection.

Plummer’s project is a text-based partner notification service. When one is diagnosed and treated for chlamydia, their partners are located and notified of the infection via text and provided with resources and information to get treatment.

Ultimately, text-based notifications have the potential to lower the incidence of chlamydia and re-infection.

An interest in women’s health

“My passion is working with females. Women’s health is my passion as a whole,” she says. She wants women to have everything they need to have a healthy pregnancy, or to safely avoid pregnancy if they choose.

That all ties into diagnosing and treating chlamydia early, before permanent damage is done.

“STIs play a huge role in the population I work with.”

Getting a DNP at UCI

Plummer decided to pursue her DNP because it is the highest level of professional nursing one can achieve.

“I really enjoy being a nurse practitioner. The DNP is the capstone, the ultimate degree for an NP to get.”

She chose UCI over another school because of a personal letter she received.

“Susan Tiso reached out to me with a very nice letter stating they had looked over my application and that they would love to have me,” she says. “Dr. Tiso is what did it. I thought ‘I have to go here’.”