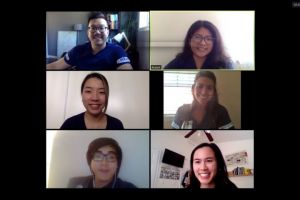 A Zoom screenshot shows some of the graduating nursing students who participated in the UCI Health Virtual Visitor Project. Photo: Sue & Bill Gross School of Nursing

Barred from the medical campus because of the COVID-19 pandemic, a group of soon-to-be-graduates in UCI’s Sue & Bill Gross School of Nursing found a way to make their last several weeks as students especially meaningful – not just for themselves, but also for dozens of patients who were prevented from having company.

Every day since May 4 up to their final hours before commencement on June 13, the mix of about 45 undergraduate and graduate students took turns visiting individuals hospitalized for reasons unrelated to the coronavirus — as virtual nurses.

With staff too busy to devote the time to talking to their patients they wished they could, the nursing students made a big difference in lifting the spirits of scores of people in seven different units of UCI Medical Center.

Using iPads provided by the hospital, patients signed into Zoom sessions and chatted with nursing students working in pairs from their homes. The service, called the UCI Health Virtual Visitor Project, was available each day from 10 a.m. to noon and from 2 to 4 p.m.

An emotional boost from virtual nurses

Cristian Lopez, 23, was nearly killed in a motorcycle accident on May 7. He says that his session a few days before he was discharged served as a huge emotional boost. At times, the Yorba Linda resident says, he struggled with anxiety and despair. He underwent five surgeries to repair his shattered body. 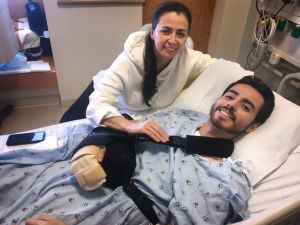 “They made me feel that … I’m on the right path,” says Cristian Lopez (with his mother, Sandra) of a Zoom conversation with his virtual nurses. “They were very kind. They just allowed me to talk, which made me feel good.”  Greg Hardesty / UCI

“I’m a little crybaby,” Lopez says. “I got a little teary-eyed on the video chat.”

The two nurses he talked to, who were armed with a basic script, mostly listened.

They asked Lopez how his stay in the hospital was going but also asked him about his life.

“I got a little emotional because I’m still undergoing a lot of trauma, but they made me feel that I had good energy, that I’m on the right path,” Lopez recalls of the 20-minute conversation.

“They were very kind. They just allowed me to talk, which made me feel good. … There’s something special about this place. They really take care of people.”

Improving interactions across the hospital

That’s one of the missions of the medical center, says Bradley Giafaglione, director of patient experience at UCI Health.

His department aims to improve not just clinical care but interactions between patients and physicians, nurses and other members of the clinical staff.

Virtual nurse ‘the highlight of my day’

“I had a spinal surgery patient tell me after a session, ‘That was the highlight of my day,’” Bernstein says.

“Then he started crying. The value of the service is that it makes patients feel better and makes [nursing students] feel as if they’re doing something important.”

A different perspective on healthcare

The near-graduates who led the project were:

“In our nursing program, one thing that we learned can be very useful for both the nurses and the patients is to talk to them about anything,” Kakwani says. “I think this program had so many positive results, especially in preventing patients from feeling socially isolated.”

Cruz says being a virtual nurse gave her a different perspective on healthcare.

“This project reinforced how important it is to have good communication with our patients, to listen to them and to provide care not only physically but also emotionally,” she says.

“Personally, it was very rewarding to know that even though we were not actually at the hospital, we were able to do something for the patients.”

Says Iribarne: “Patients have lives, they have stories, they have hobbies. It was really important to tap into that side of them and just remind them that we’re there to support them as people.”

The program has been so effective, Brown and others are seeking ways to continue the program long-term.

“This ended up being such a beneficial platform,” says Brown, who came up with the idea for the program.

Lopez says he faces a year of recovery and physical therapy after his accident, in which he clipped the back of a truck that had pulled out in front of him. It’s likely that Lopez will have limited use of his right arm. Before the accident, he was working at his family’s concrete polishing business.

He plans to return to UCI Medical Center and thank the nurses in the orthopedics unit. And he wishes his virtual nurses good luck in their careers.

“I don’t remember anything about the accident,” Lopez says. “But I’ll always remember them.”