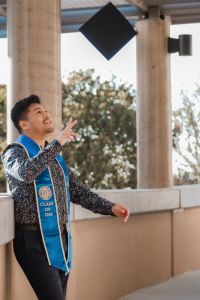 For a while, Kevin Nolasco thought he would study psychology and become a psychotherapist.

One day, though, he was introduced to the possibility of a nursing career late in high school. A conversation with a nurse practitioner convinced him he should consider the field.

“I put the glove on, and it fit after trying on several gloves.”

It turns out that his time in high school prepared him to take the next step.

“I had the perfect profile for nursing. I took the right classes, did the right things,” he says.

“But I didn’t know about nursing before that. It all just kind of fell into place.”

Inspired by his aunt

It was his beloved aunt’s battle with cancer that confirmed for him that nursing was absolutely where he wanted to be.

“Seeing the entire process moved me. The psychosocial dynamics, the biological dynamics,” he remembers. “That’s what made me realize this fit.”

Nolasco’s aunt eventually passed away. Seeing her death, he says, had a huge impact on him not just personally, but professionally.

“The whole dynamic of the concept of death from a nursing perspective is holistic and wholesome. It’s one of the things I love about nursing.”

‘I love seeing how the body changes’

He’s still trying to decide what area of nursing to enter.

As a self-described fan of pathophysiology — the physiological processes associated with disease or injury — he finds the intensity of the surgical intensive care unit (SICU) appealing.

Planning his next move

Right now, he is back at home in Salinas, CA, after graduating on June 13. He’s studying for the National Council Licensure Examination (NCLEX), the test all new nursing graduates must take to become licensed nurses.

The test is intense, Nolasco says. “It’s a collection of all of your knowledge in nursing school. There’s a broad range of things we have to study for.”

Ultimately, he has his sights set on becoming a nurse practitioner. However, Nolasco wants to make sure he’s positioned for success first.